The three hour session, attended by around 20 economics students, began at 1:30pm with a short introductory lecture by guest speaker, and FP of the school, John Farmer, who discussed the plight of migration and the need to manage mass migration in a humane way. 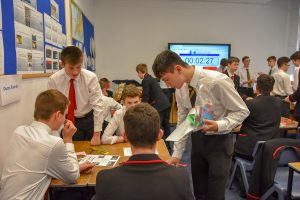 The first activity, called the ‘Trading Trainers’ game, aimed to give the pupils a sense of the context in which migration occurs by asking them to simulate villagers making sports shoes for sale in the developed world. The cramped, hot conditions in the classroom unintentionally but effectively replicated factory sweatshop conditions; this helped to build tension as the pupils felt themselves slipping inexorably into irrecoverable debt

There was a real buzz of energy in the room, and as things progressed, you could feel pupils’ frustration at not being able to do anything to extricate themselves from their predicament. Sixth formers played the roles of money lender, debt collector, market makers and remittance officers with effective, albeit simulated, menace.

Based on this experience, pupils were better able to understand why families take such risks in escaping their country of origin to seek a better life in Europe.

Pupils were then tasked with assessing and choosing policy solutions to mass migration. The groups took this on quite seriously, with a buzz of constructive conversation filling the school library in which this second activity took place. The students applied genuine critical analysis to a set of offered solutions as they tried to work out the best options to take.

The resulting policy choices were subjected to probing assessment by four external judges, who eventually selected a winning team, although all six of the groups were considered to be excellent.

The winners, each of whom received an Amazon gift voucher, are:

This entry was posted in Lecture News, News. Bookmark the permalink.